The UK’s Tech Hubs of Tomorrow: 80% based in the South of England, with universities tipping the scales

London, 1st February 2018 – When it comes to technology, London, Manchester and Birmingham dominate the job market. However, growth in these cities is slow and the competition increasingly high. With this in mind, Joblift has analysed which smaller UK cities and towns are set to become Britain’s tech hubs of tomorrow. By analysing the top 50 locations in terms of the number of tech vacancies over the last 12 months, Joblift has ranked the top ten places, with under 200,000 citizens, [1] predicted to dominate the UK’s tech scene in coming years. A point based system was implemented, taking into account the average increase in tech vacancies, the percentage tech jobs held compared to the entire job market, and the total number of tech jobs in every location. Extra points were also awarded to cities that have a university which was listed in the top 500 universities worldwide for Engineering and Technology degrees. [2] It is notable that eight of the top ten cities are in the South of England, with only Warwick and York bucking the trend.

EDUCATION IS KEY: 70% OF THE TOP TEN ARE HOME TO A WORLD-RENOWNED TECHNOLOGY UNIVERSITY

According to Joblift's findings, seven of the UK's top ten future tech centres are home to world-class Engineering and Technology universities. Cambridge tops the list, where its 36,802 tech job vacancies made up 37% of the city's job market in the last 12 months. The city topped the analysis in terms of the number of tech jobs on offer, too, no doubt owing some of this success to the University of Cambridge's ranking as third worldwide for Engineering and Technology courses. Oxford (9th worldwide university ranking) follows with 19,902 tech vacancies in the last year making up a quarter of all jobs offered in the city. Guildford, home to the 196th ranked University of Surrey, comes in third place with 10,634 tech jobs posted in the last 12 months, with one in every four vacancies being tech focused. Fourth place falls to Warwick (125th worldwide university ranking), where 22% where the 7,830 vacancies posted in the last 12 months have concerned technology or computer science.

MORE THAN A QUARTER OF ALL VACANCIES IN BATH, EXETER AND YORK ARE TECH BASED

Bath comes in 8th place, with a quarter of the 7,673 vacancies posted in the last year being tech focused. The regency city is home to both a world-class university (172th ranking) and the annual Bath Digital Festival. Following this, Exeter – location of the ‘Southwest’s home to Science & Technology’, Exeter Science Park – ranks in 9th place in our findings, advertising 8,093 tech job postings. In the last 12 months, one in every five vacancies in the Devon capital was for a tech position, and the university takes 318th place in the worldwide Engineering and Technology ranking. Rounding off the top ten is the UK’s first Gigabit City, York. The North-eastern city saw its 7,528 tech jobs posted in the last year making up 21% of its entire job market and the university is ranked 335th worldwide for its Engineering and Technology courses.

Despite universities clearly exerting a major influence on the UK’s tech future, three cities in Joblift’s analysis made the top ten without hosting a leading university. Peterborough – home to the hi-tech ‘Innovation Lab’ – ranks in 5th place, ranking highly both on the total number of tech jobs posted (10,564) and the percentage these vacancies held in the entire job market in the last 12 months (25%). In 6th place, 42,315 vacancies have been posted in Gloucester in the last 12 months, with 25% of these being tech focused. The city is home to a ‘digital high street’ and is the location of a number of tech company offices, including cyber security business BAE Systems, and Safran Landing Systems. Basingstoke completes the top ten, ranking in 7th place, with 26% of the 38,922 vacancies in the town being focused on tech. 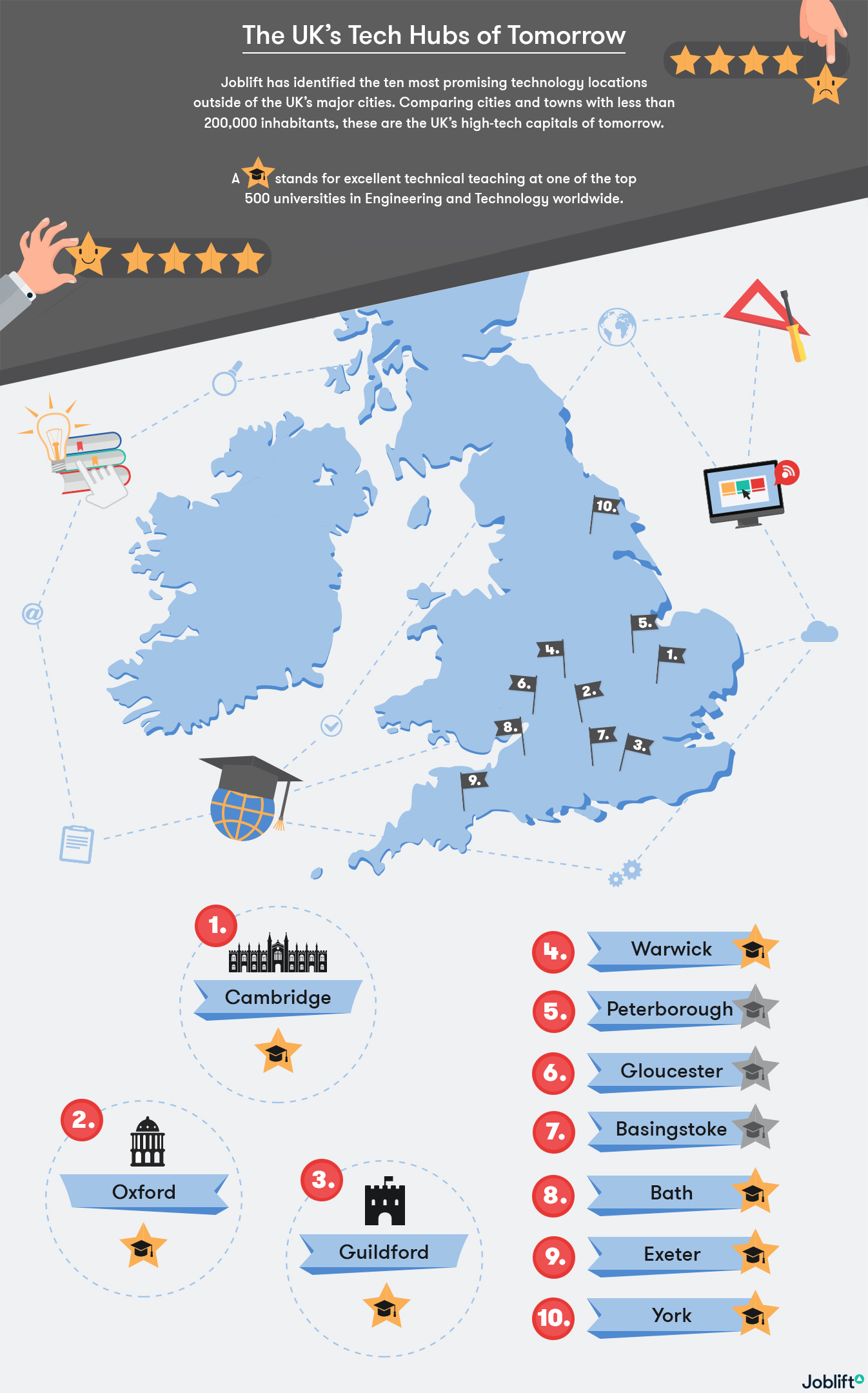 Joblift is a job search platform providing candidates with the most intuitive and frictionless experience during the recruiting process. Joblift applies the latest machine learning techniques and big data-based algorithms to offer the optimal match between employer and job seeker. Currently active in the US, the UK, Germany, France and the Netherlands, Joblift cooperates with over 4.000 partners to incorporate over 10 million vacancies on its platform. Joblift is a highly energetic and entrepreneurial team led by the experienced founders Lukas Erlebach (CEO), Alexander Rausch (COO) and Malte Widenka (CTO), who most recently held C-Level positions at companies such as Zalando, Amorelie and Frontlineshop.