Fintech versus Traditional Banking: Huge growth and the opportunity to earn up to 23% more make the disruptive industry an attractive prospect

11th April 2018 – On the 22nd March, the British government launched the Fintech Sector Strategy (FSS), a programme designed to help the sector grow in the face of Brexit. The disruptive sector has taken the banking world by storm, casting a shadow on the future of traditional banking. The threat from Brexit has also called into question how Britain has – and will – deal with the country’s departure from the European Union in terms of its strong worldwide financial standing. With this in mind, Joblift has analysed and compared the UK’s Fintech and traditional banking sectors over the last 12 months. The analysis shows that traditional banking has felt the effect of the competition from Fintech and the upcoming Brexit with vacancies decreasing by 3% monthly, while Fintech seems to be flourishing, with a huge growth of 9% monthly, in the face of these challenges.

While 38,926 vacancies associated with Fintech have been advertised in the UK in the last 12 months – almost three times less than the 101,700 jobs posted in traditional banking in the same time period – the industry has seen a huge average monthly increase of 9% in the number of vacancies posted. To compare, the traditional banking job market has seen a 3% decrease in vacancies and the UK job market as a whole has increased by 2% on average monthly. The buoyancy and demand for Fintech positions is also highlighted by analysing the time taken to fill open vacancies. According to Joblift, Fintech vacancies spent, on average, 33 days online before being filled – eight days less than openings in traditional banking.

In terms of professions, the most in-demand Fintech roles highlight the difference in development between the already established traditional banking sector and its disruptive younger sibling, Fintech. Accountants rank as the top position in traditional banking, making up 23% of all vacancies in the last year, finance managers (8%) came in second place, followed by financial analysts (7%) and financial controllers (4%), with mortgage advisors (4%) rounding off the top five. Whereas, the top positions in Fintech show that investment is still needed to perfect and develop these new technologies and products before prioritising building up a client base and managing accounts. Developers made up 25% of all Fintech vacancies in the last 12 months, with analysts (both data and financial) accounting for 4% and business development managers rounding off the top three with 2%. Product managers (2%) and marketing managers (1%) finished off the top five.

While coveted positions in the traditional banking sector are notorious for holding large salaries, Joblift’s study has found that candidates looking for a sizeable pay check should perhaps look to Fintech instead. Of the 15,597 vacancies that stated a salary in their job description, the average Fintech salary was £45,130 – compared to an average salary of £36,593 in traditional banking (of the 53,994 vacancies that stated a salary). Furthermore, 41% of the Fintech jobs with salary data advertised a wage over £50,000, compared to just 20% of traditional banking jobs. However, it is important to keep in mind the range of professions in traditional banking, in comparison to Fintech. While, 30% of all Fintech vacancies asked for candidates to hold a university degree, the same was demanded in just 17% of traditional banking openings – presumably down to the large number of secretarial and office administration positions (3% of all vacancies) which do not ask for a specific education in their job advertisement. 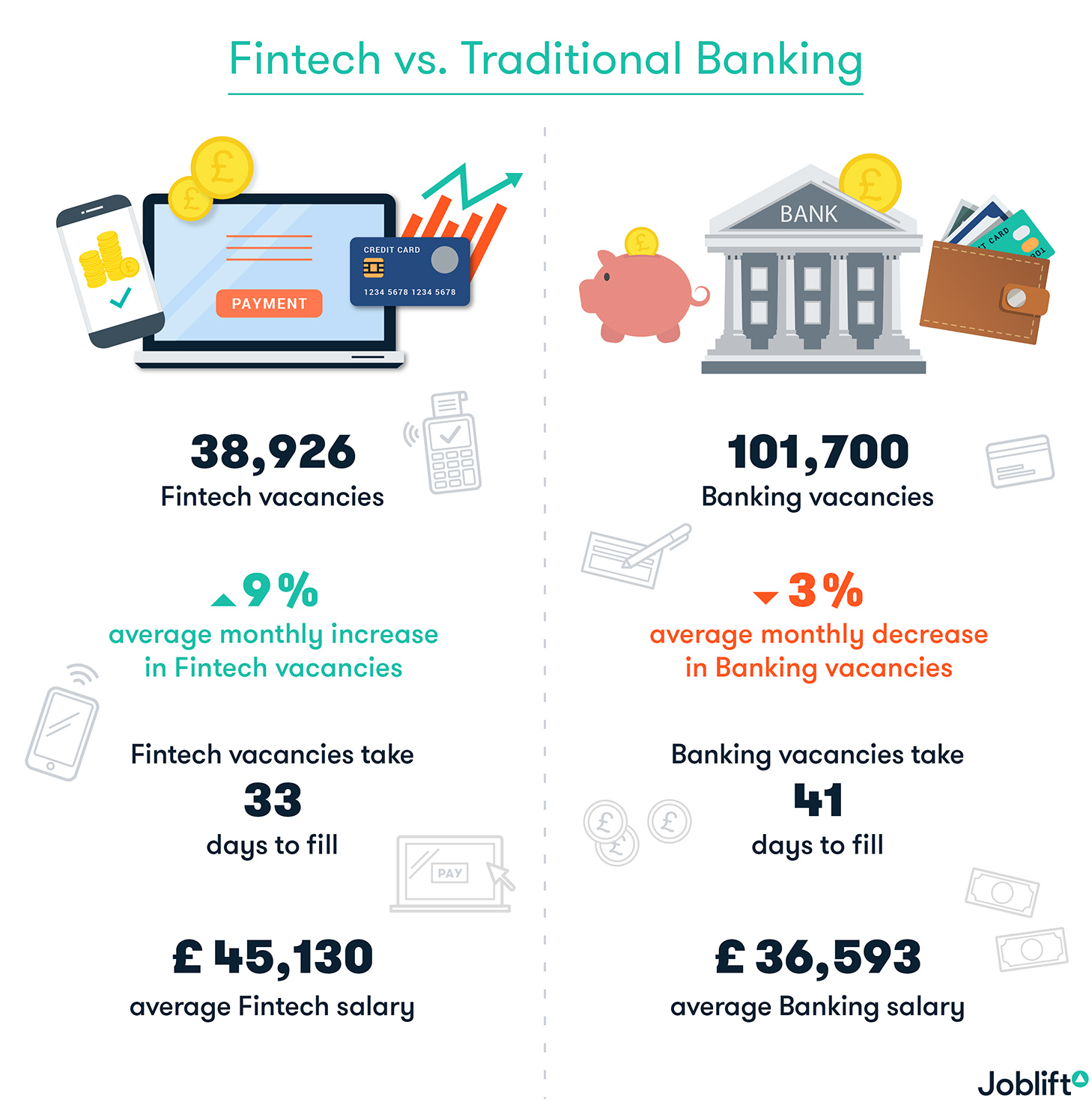 Joblift is a job search platform providing candidates with the most intuitive and frictionless experience during the recruiting process. Joblift applies latest machine learning techniques and big data-based algorithms to offer the optimal match between employer and job seeker. Currently active in the US, the UK, Germany, France and the Netherlands, Joblift cooperates with over 4.000 partners to incorporate over 10 million vacancies on its platform. Joblift is a highly energetic and entrepreneurial team led by the experienced founders Lukas Erlebach (CEO), Alexander Rausch (COO) and Malte Widenka (CTO), who most recently held C-Level positions at companies such as Zalando, Amorelie and Frontlineshop.