Meet Erol, our Senior Business Intelligence Manager who is also our Office Santa because of his charisma and down-to-earth personality. 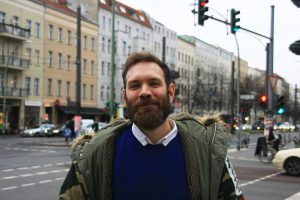 What did you do before joining Joblift?

Funny story 🙂 I was writing my book “HTML5 in all aspects”  about general principles of Web Development in Istanbul, Turkey when I got introduced to Joblift through a referral. Everything during the interview went smoothly; Lukas (our CEO) framed his search of an expert to build everything in reporting from scratch with the following remarks: “Do you know soccer? I am looking for a number 6 who can play box-to-box and help all departments in a central role”. That was the summary of what I was looking for and what I am good at. So, I took the bullet.

What is your favourite perk of working here?

Right from the start, even till now, I perceived Joblift as patronage for people who are aiming for self-development in their careers while contributing to a bigger achievement by enjoying the sensation of fulfilment. On many occasions, I had the chance of observing the outcomes of self-development and how it refactored the company by boosting the performance. The proximity/time-interval between idea generation and realization in the company is one of the things that fascinated me the most.

If you were a film character, which one would you be?

Honestly, ever since I could remember, Thomas More’s character in “A man for all seasons” (1966) has been my role model. Absurdly, in my country, the expression of “being a man for all seasons” has always been criticized and demonized due to fickle nature of the person, yet the essence is about showing versatility by remaining faithful to moral and ethic values in the ever-changing environment. In the film, More’s passion and fidelity for truth, in almost all occasions, dominated his way of conducting business as well as in his private life, which at the end led him to his death. At the same time, More was a well-respected scholar, one of the first and foremost founding fathers of Humanism with Erasmus, and a big zealot. His honesty in the state-affairs, religion and other private matters had never been taken malevolent, but frankness. Being able to create this bubble of autonomy in the early 1500s England, mostly backed by the virtues and the never-ending pursuit of perfectionism, fascinated me. In the end, saying “death comes for us all, even for the kings” to a king’s face and leaving the room without a scar, is not everyone’s cup of tea.

See all our openings

Born in Ukraine, raised in the UK and now chasing her dreams in Germany. Die-hard lover of sushi, chow chows and adventures. View all posts by Polina Halabitska